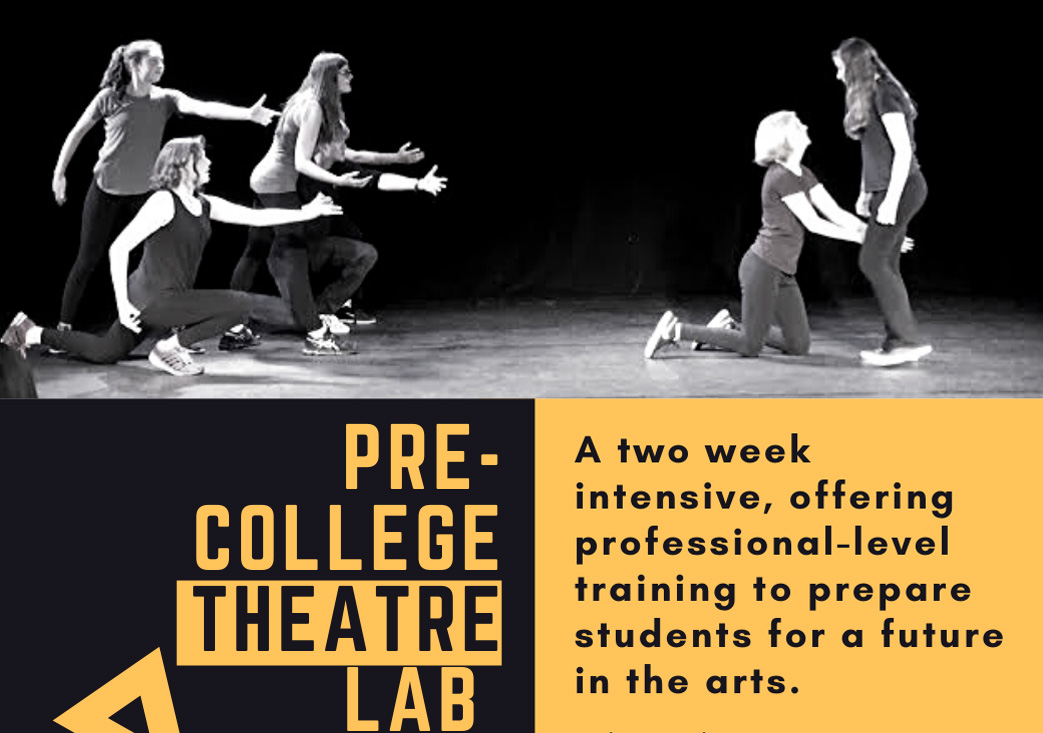 Overview:
Competitive college theatre departments are looking for applicants who are not only strong performers, but well rounded individuals who are willing to take risks and work well collaborating with others.

“Yale’s acting department admits talented and committed individuals who possess an active intelligence, a strong imagination, and a physical and vocal instrument capable of development and transformation….Not only is each class of actors a working ensemble as it trains, but also each actor works as part of a larger company.” - College Admissions 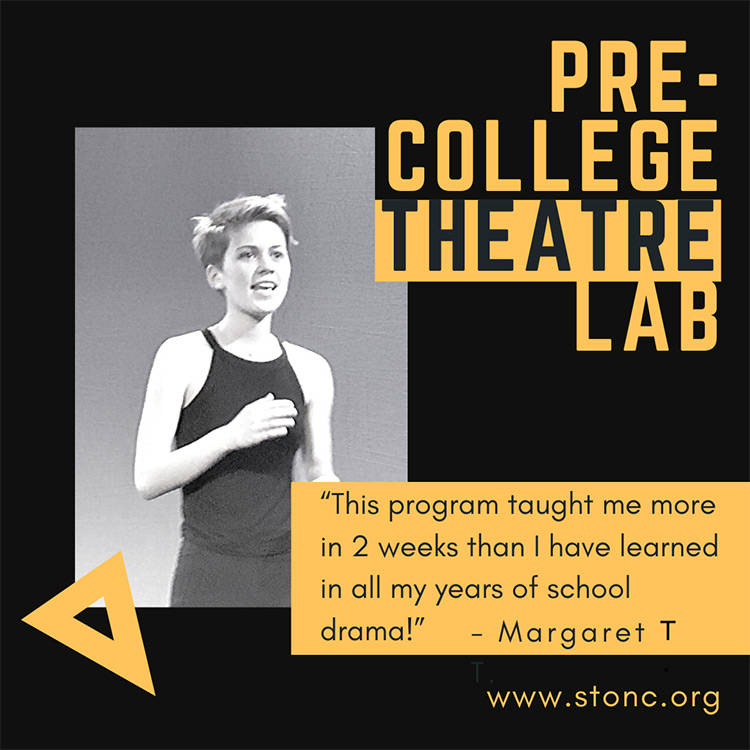 The Pre-College Theatre Lab offers high school students a fun, intensive curriculum that will prepare and position them for both college and professional opportunities.

The curriculum has been created by industry experts who have a passion for developing the next generation of theatre artists. Students develop performance and communication skills that will serve them throughout their professional careers.

Special attention has been given to online curriculum making sure that students are in an active learning environment.  Zoom has the ability to provide group learning and breakout rooms where students work in pairs or small groups allowing instructors to provide individualized attention. 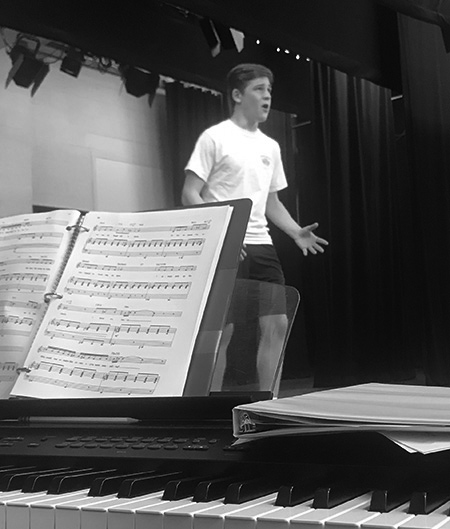 n to harness vocal strength exploring how we use our voices and how that translates to live performance. This class covers healthy vocal production, storytelling through song, how to select material and where vocal trends are shifting in the business. Students leave with a better understanding of their instrument and with personalized song cuts to use for auditions or performance.

Physical Theatre:
Physical theater tackles character, storytelling, and emotion.  Through this creative and rigorous training, students develop physical awareness, learn to get “out of their heads”, and gain confidence on stage. Through object manipulation, physical comedy, clowning, mime and physical conditioning students gain a range of practical skills that can be applied to all styles of performance.

Auditioning for Film and Theatre Workshop:
Students work with a seasoned New York casting director to delve into current industry standards for audition etiquette.  Topics include what makes great audition material and techniques to make your audition a success. Each student receives individual resume consultations.

Additional Masterclass Workshops with Established Industry Artists :
Students round out their training with a series of masterclasses meant to expose them to unique forms of performance and theatre-making. Past topics include: 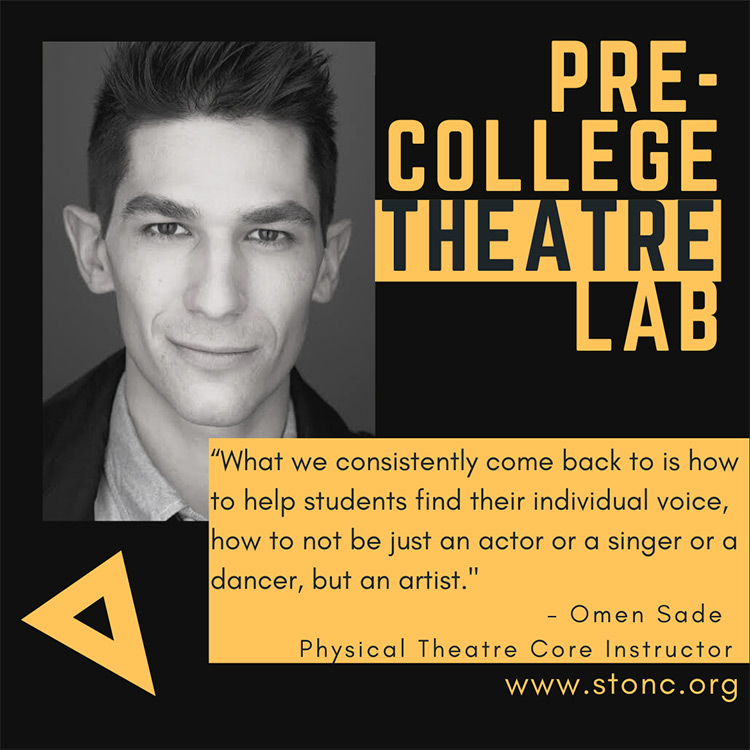 Omen is a NYC based actor, writer, physical theater creator, and teacher. Omen is a veteran performer at STONC, and a co-founder of Bros Do Prose. Synthesizing extensive physical and classical theater training from London, the Netherlands, Italy, and the Lecoq School in Paris, Omen has taught at Broadway Classrooms, Circle in the Square, and Hunter College in New York City. This will be his 7th season teaching at the Pre-College Theater Lab. www.dramaticspace.com 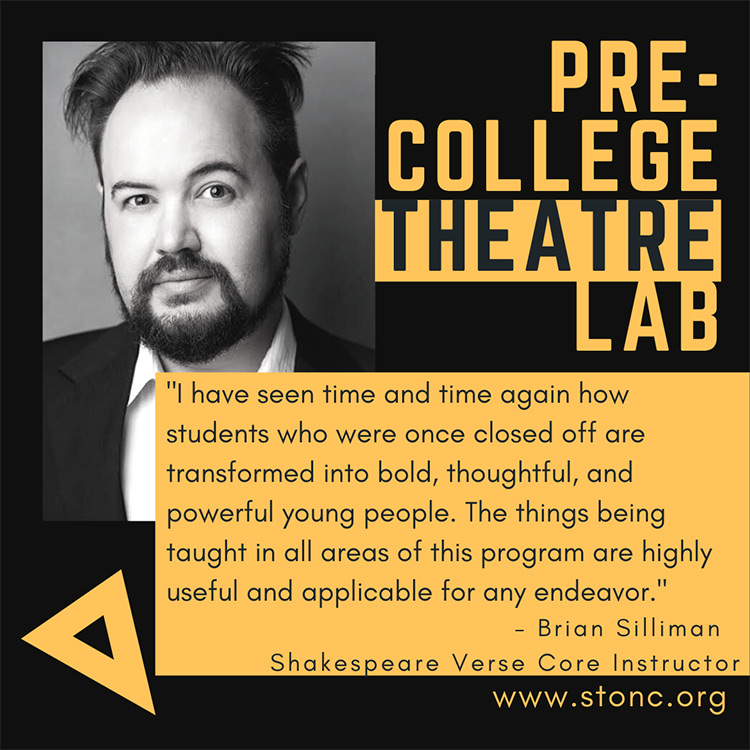 Brian Silliman has acted all over NYC, winning the NYC Fringe Award for Outstanding Achievement in Performance for The Particulars in 2012 as well as acting in The Honeycomb Trilogy. Regionally he's spent a record number of seasons with the Summer Theater of New Canaan (A Midsummer Night's Dream, Twelfth Night, Henry IV, My Fair Lady, etc) and played the title role in Butler at the Majestic. Television includes High Fidelity on Hulu, The Baker and the Beauty, Law & Order: SVU, Unbreakable Kimmy Schmidt, Boardwalk Empire, and Orange is the New Black. Film includes The Horror at Gallery Kay and Men In Black International. 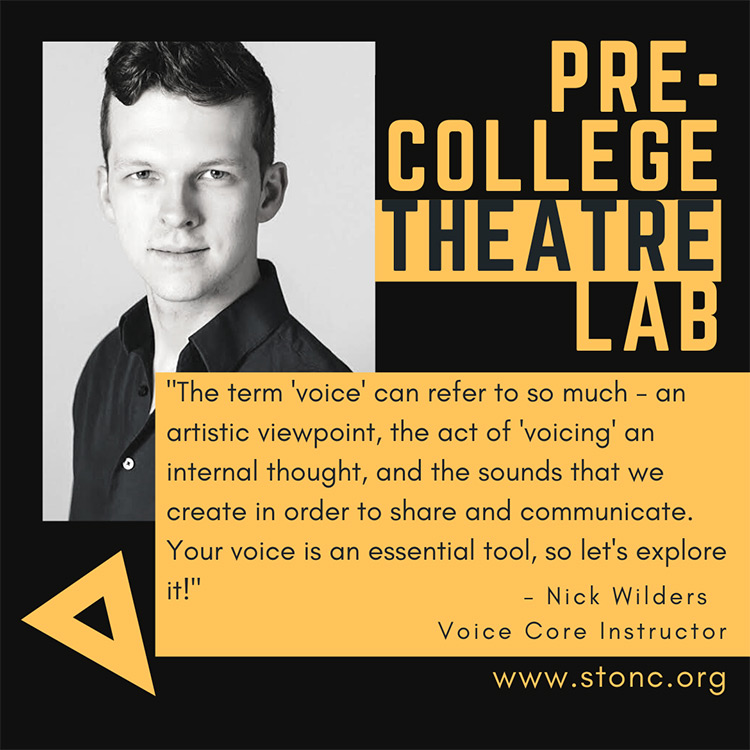 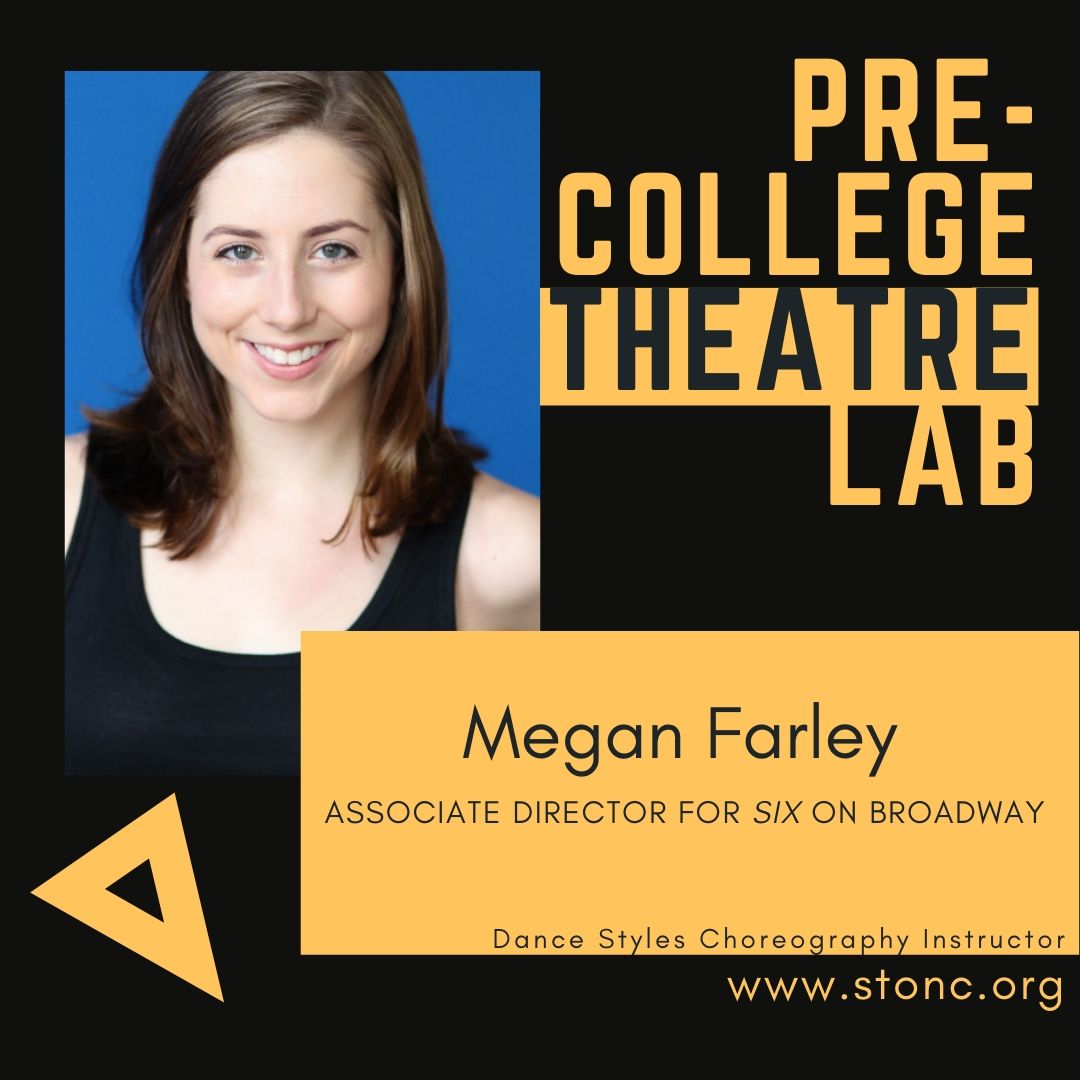 Megan E. Farley is a director/choreographer based out of New York and Chicago. She is currently serving as Associate Director for SIX on Broadway and will be opening a new SIX company in Chicago this coming Winter. Growing up as a dancer, Megan found her love for theater and the performing arts in her high school years. She earned a BFA in Musical Theater from Ball State University and went on to hold an extensive professional career as a performer in the Chicagoland area. After performing in Paramount Theatre’s productions of Hairspray, Disney’s The Little Mermaid, and Elf, Megan then transitioned to a career behind the table as choreographer for Paramount’s production of Legally Blonde. Other professional choreography credits include: Big Fish (BOHO - Joseph Jefferson Award Nomination), Shrek The Musical (Ball State University), Disaster! The Musical (Chicago Theater Workshop), All Shook Up, The Wizard of Oz and How to Succeed in Business… (Little Theatre On The Square) among many others. Megan has extensive dance captain and associate experience, and she teaches Musical Theater Dance classes throughout the Chicago community. 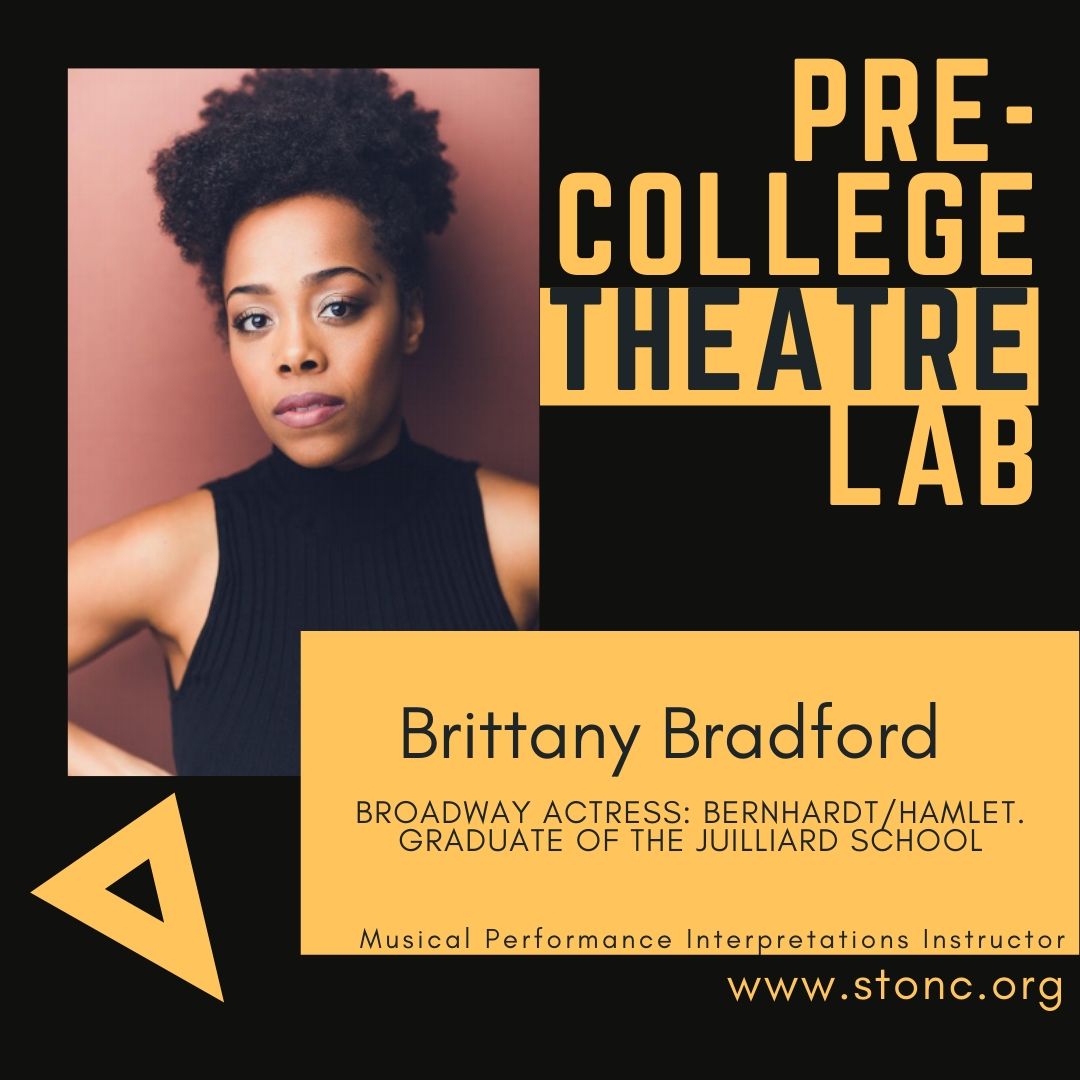 Brittney Branford  (Musical performance interpretations)
Brittany Bradford graduated from The Juilliard School (Group 47) in 2018, and has worked non-stop in critically acclaimed theater projects ever since.  She made her Broadway debut as ‘Ophelia’ in Bernhardt/Hamlet opposite Janet McTeer, and most recently starred in the title role in Mac Beth at the Hunter Theater Project. She was also featured in Fefu and Her Friends at Theatre for a New Audience, and in the Roundabout Theater Company’s production of Merrily We Roll Along staged by the Fiasco Theater. In addition to numerous regional credits, Brittany is the co-founder of HomeBase Theatre Collective in New York. 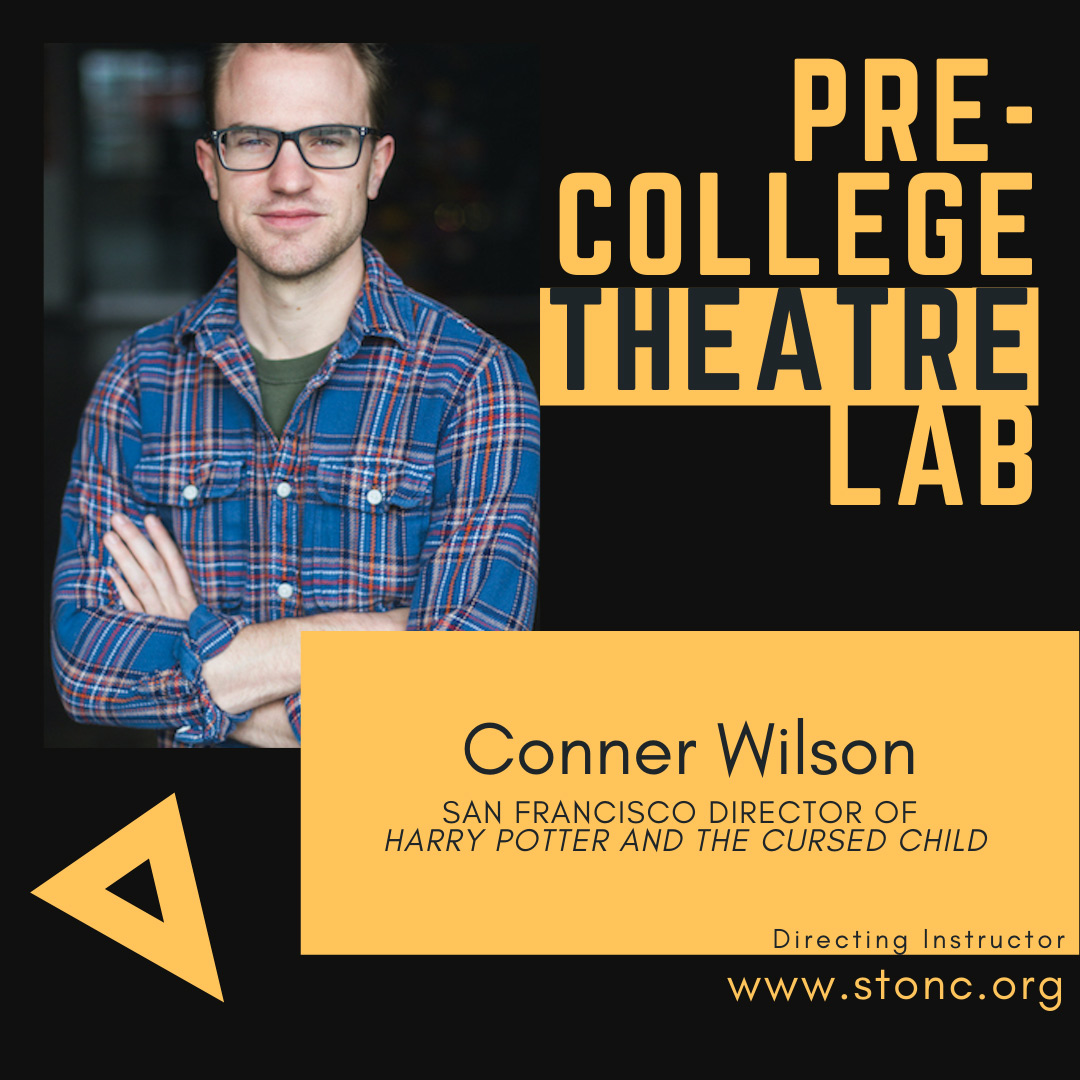 Conner Wilson (Directing)
Conner Wilson is a Freelance Director and the San Francisco Director of Harry Potter and the Cursed Child.
After Graduating from the University of Oklahoma he was awarded the Fellowship in Classical Directing from The Great River Shakespeare Festival and studied under Artistic Director Paul Mason Barnes. In early 2013 he moved to Chicago and quickly linked up with the American Theater Company where he worked as Assistant Artistic Director to PJ Paparelli.

In May 2015 he alongside Kyle Whalen, Lindsey Kite, and Madison Niederhauser founded the critically acclaimed Commission Theatre: a Classical company based out of Chicago, Illinois known for its bold and imaginative productions of Shakespeare's plays. Conner was the Artistic Director of Commission for 5 years. In 2017 he assistant directed the Off-Broadway revival of Torch Song Trilogy by Harvey Fierstein under the leadership of Moisés Kaufman. The show featured Michael Urie and Mercedes Ruhl in the title roles.

In 2018 he rejoined his Torch Song family, as Associate Director, for the shows transfer to Broadway. The show garnered two Tony Award Nominations, including Best Revival of a Play.
Soon after Torch Song, Conner linked up with the Directing Team of Harry Potter and the Cursed Child and continues to maintain the San Francisco production.
He has studied from and worked with many great directors including Moises Kaufman, John Tiffany, Nick Bowling, PJ Paparelli, Jim Edmondson and Paul Mason Barnes. 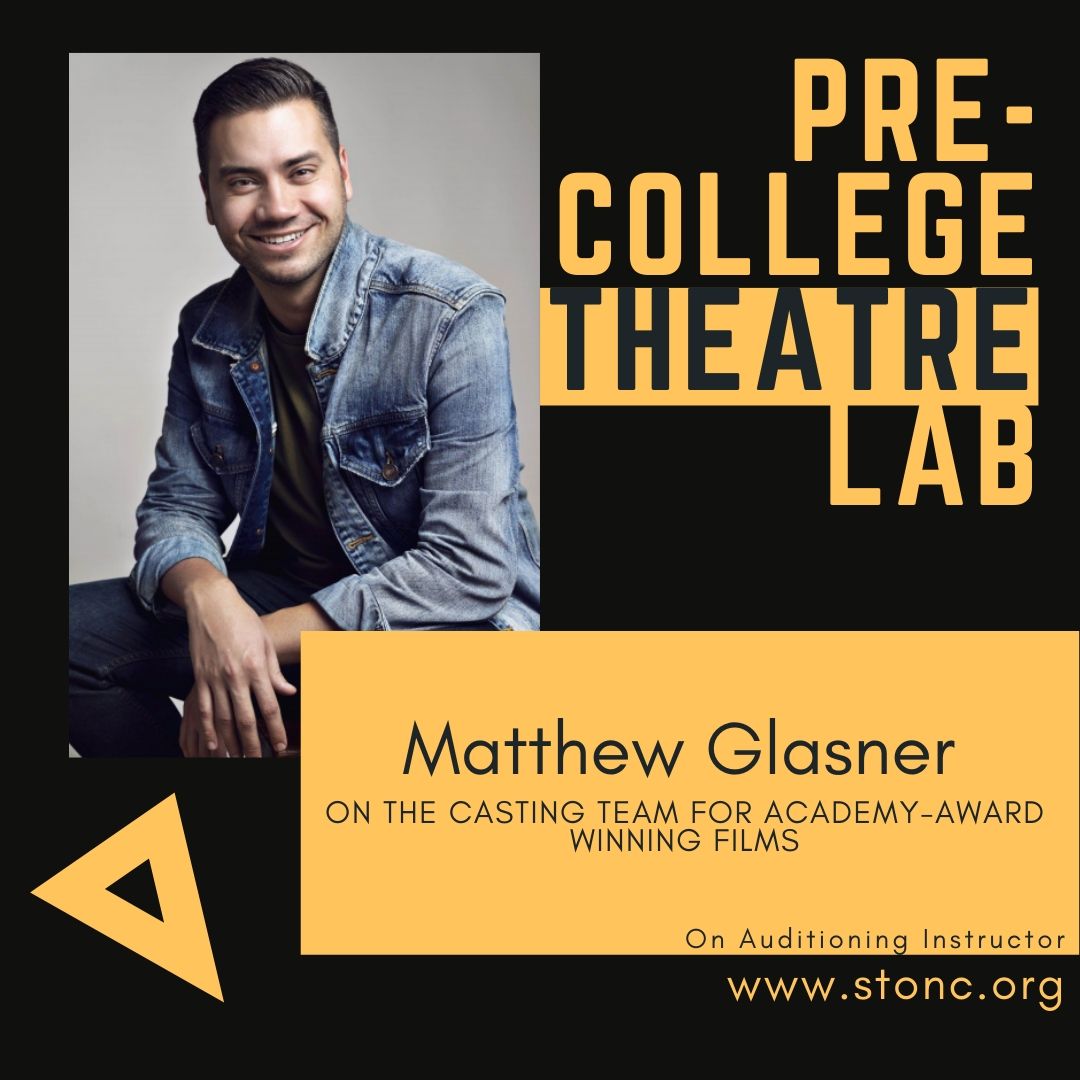 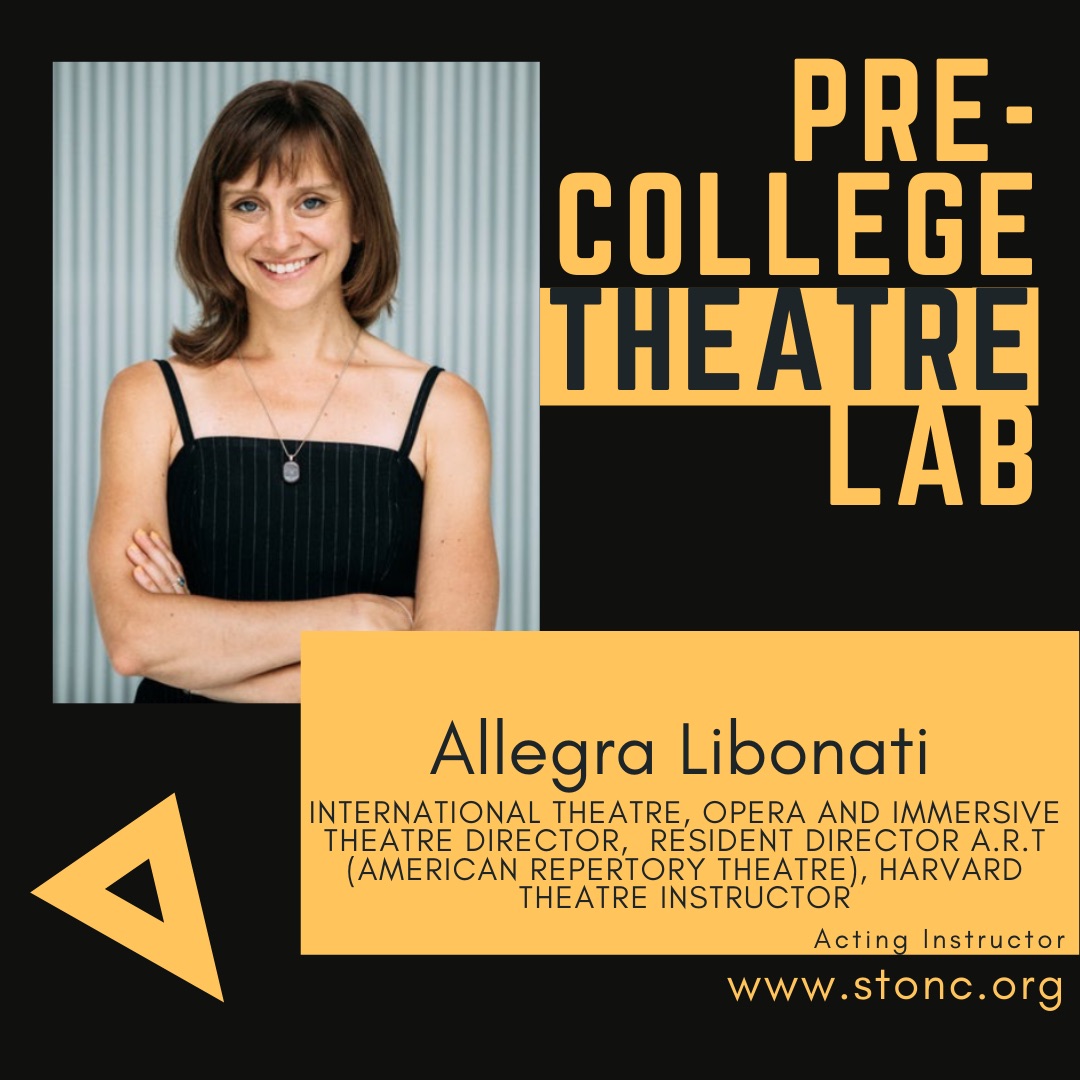 Allegra Libonati - (Acting)
Allegra Libonati is a freelance director for Theater and opera.   She has worked the past nine years at the American Repertory Theater as Resident Director, she was the Assistant Director on the Tony Award Winning Broadway revival of Hair, and has directed for theater companies both nationally and internationally.   As a lover of music, circus, magic, dance, masks and puppets, she often incorporates these theatrical elements in her work. (Full Bio) 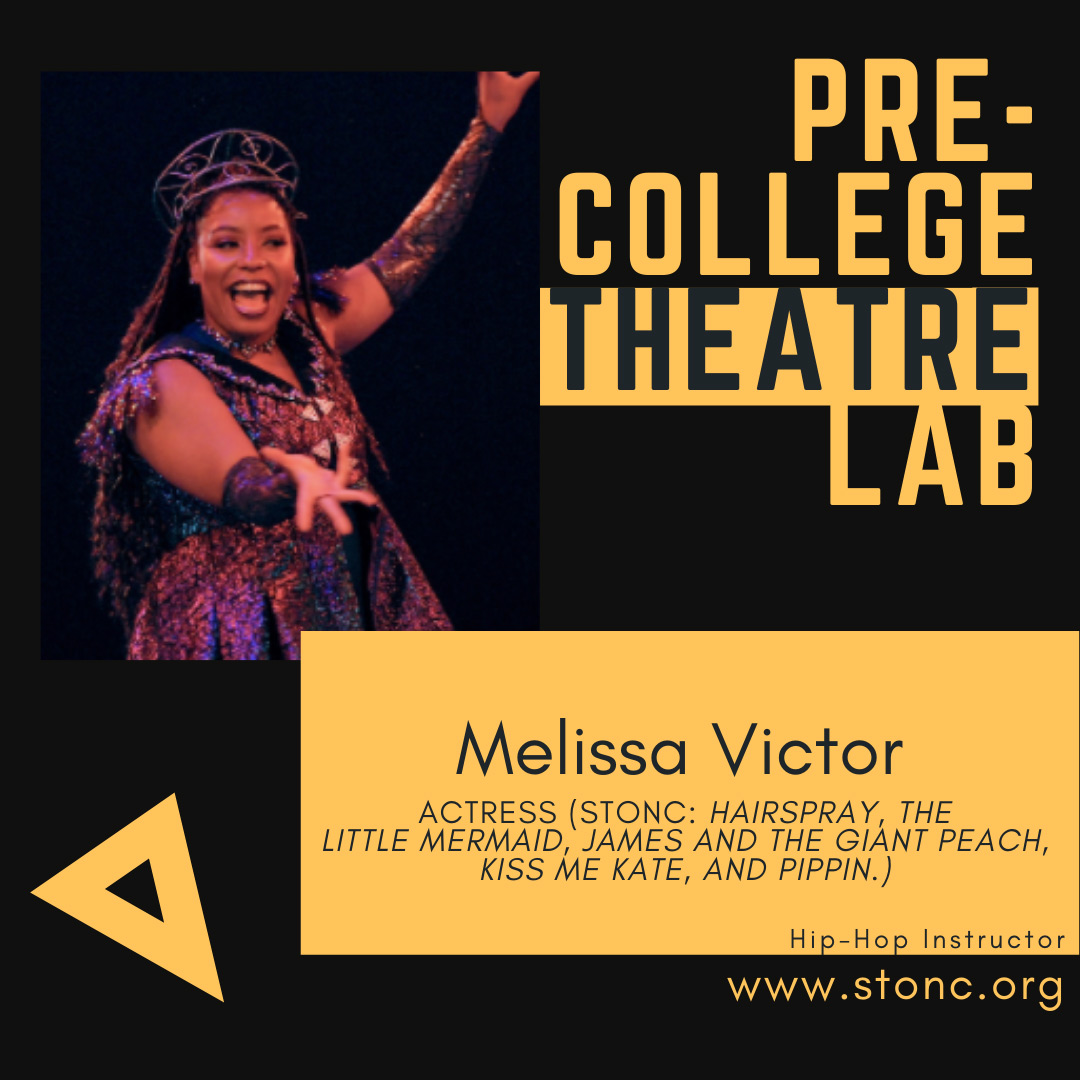 Melissa Victor (Movement)
Melissa Victor. She is 2012 graduate for The Catholic University of America and currently lives in NYC. Melissa has been a part of the STONC family since 2014 and was seen in Hairspray, The Little Mermaid, James and the Giant Peach, KISS Me Kate and their most recent production of Pippin. She was also recently in the all black production of Oklahoma at Denver Center of the Performing Arts, The Wiz at Ford’s theatre. With a background in ballet, hip hop, street jazz and tumbling, Melissa is excited to be teaching this master class. So get ready to move, sweat and be fierce 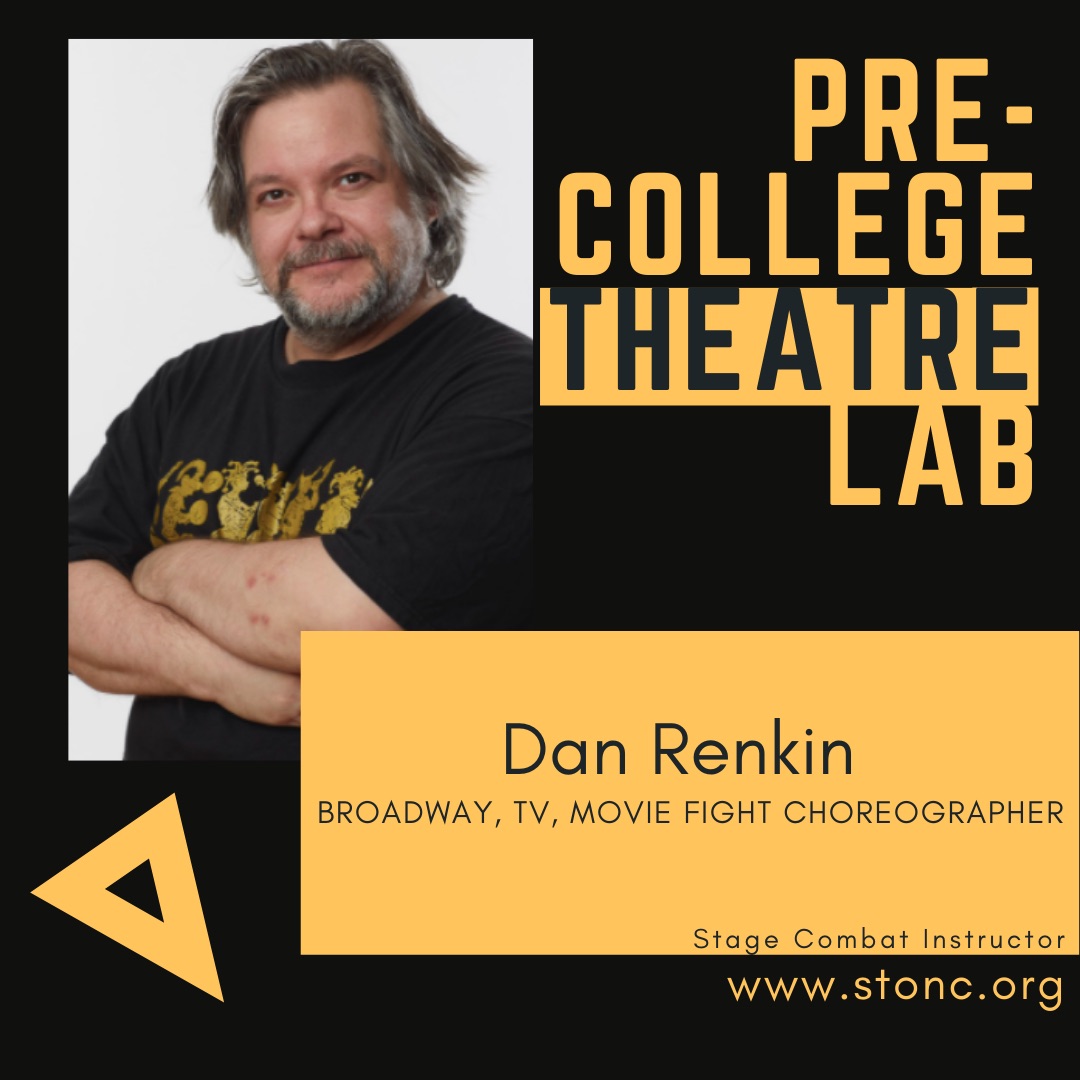 Dan Renkin (Stage Combat)
Broadway, TV, Movie fight choreographer.
Dan Renkin trained with Tony-recipient H.H. Barry, one of the founders of modern fight direction for stage and film. Recent work includes the workshop premeire of Douglas Carter Beane's new musical HOOD!, ALL MY SONS (w/Alec Baldwin and Lauie metcalf) and WOULD YOU STILL  (w/Kathleen Turner)  n addition to STONC, he teaches for Circle in the Square, The American Academy of Dramatic Arts, Broadway Classroom, Broadway For All and the New York Film Academy.

All students need to pre-register prior to submitting an audition video.
Please contact This email address is being protected from spambots. You need JavaScript enabled to view it. should you have any trouble pre-registering.

How to Audition:
We are thrilled that you are interested in this year's Pre-College Theatre Lab. As part of the application process to this program, we are requesting a self-tape audition from all applicants. The self tape will help our Education Director get to know you better and select the students for the Theatre lab. This year we are putting together an ensemble of students who not only desire to work on their skills individually but have an enthusiastic spirit for collaboration. Space is limited to 12 students. Audition submissions are now being accepted. Pre-College Theatre Lab acceptance will be made on a rolling basis.

Self-tape instructions:
You will need a camera or a device that has a camera (smartphone, laptop…etc) internet connection, a musical track (karaoke style) or musical accompanist.  If you don’t have access to music you can sing a cappella if needed.

When you film make sure that background noise is kept to a minimum and that the camera is at eye-level. The light source should be in front of the student (off camera) and try to film against a plain background. Make sure the camera is stable. Frame the shot from the chest up.

- Please submit your headshot/or photo and resume (if you have one)
Next please perform only ONE of the following:

- 60 seconds of a song, Do your best to sing to a track or have an accompanist.  If not, please sing acapella.  Please do not play the piano and sing at the same time.

- 60 seconds of a monologue. This can be from a play or a book. Please do not use material from tv or film.
Finally, tell a 1 minute story about a meaningful experience you’ve had in the theatre. How did it change you? What did you  learn?